Start playing with your food again

Pantry dump – noun, from the Latin, dumpus totalis foodia – the act of looking into your food cupboard, grabbing whatever is closest at hand and/or about to spoil, then concocting a meal that, despite the odds, is both edible and vaguely nutritious.

And lord was this recipe was a pantry dump, which to be fair, is how most hashes come to be. I had sweet potatoes, russets, and chicken to use…and quick. Ginger and garlic? Check! I had gochugaru, boy did I have gochugaru to use. Last year’s culinary infatuation was with Korean food and my first big try was homemade kimchee (hint: it was a success). But finding gochugaru (fiery red, medium-spicy Korean chili flakes) isn’t easy, even in Chicago, and buying it online yields large quantities. Luckily, it’s a flavorful and colorful addition to any spice rack and lots of fun to play with once you’re familiar with its potential. I’ve done similar versions of this hash in the past, it’s wonderfully quick and hearty, with the added benefit of being baked, making clean up a snap. And by the way, if you don’t know the virtues of a foiled-lined baking sheet, I implore you to find out…maybe even with this recipe!

Admittedly, gochugaru is not an ingredient I would normally include on a CookBlogNosh recipe, because it’s not readily accessible and unless you’re committing to a lot of Korean cooking, it’s a bit of a one-off, which is the bane of my cooking existence. Having it around though, forces me (and maybe you) to play and get creative, which is fun! Sweet potatoes and any kind of spicy heat is a heavenly match – remind me to tell you about my chipotle sweet potato tacos another time – and from there, it’s all about anything else you have to enhance that lovely combination. Today, it was chicken, but you could absolutely use pork, or omit meat altogether and use chunks of tofu to create a vegan version. This recipe is also gluten free, though as always, check the labels of your soy sauce, as well as the doenjang, to make sure the ingredient list is safe for your diet. Normally I would have used lots of scallions, but I was out, so I used peas for a some color and texture. Toss in some sesame seeds and you’re on your way to a Korean-inspired feast. I’m still betting on Korean to be the next big thing, and if you’re willing to bet with me, then invest in some gochugaru yourself, and give this a try.

2  tablespoons oil (such as vegetable or light olive oil)

Serves 4-ish, but adding the rice would definitely carry this past the ish-mark, maybe even into leftover land… 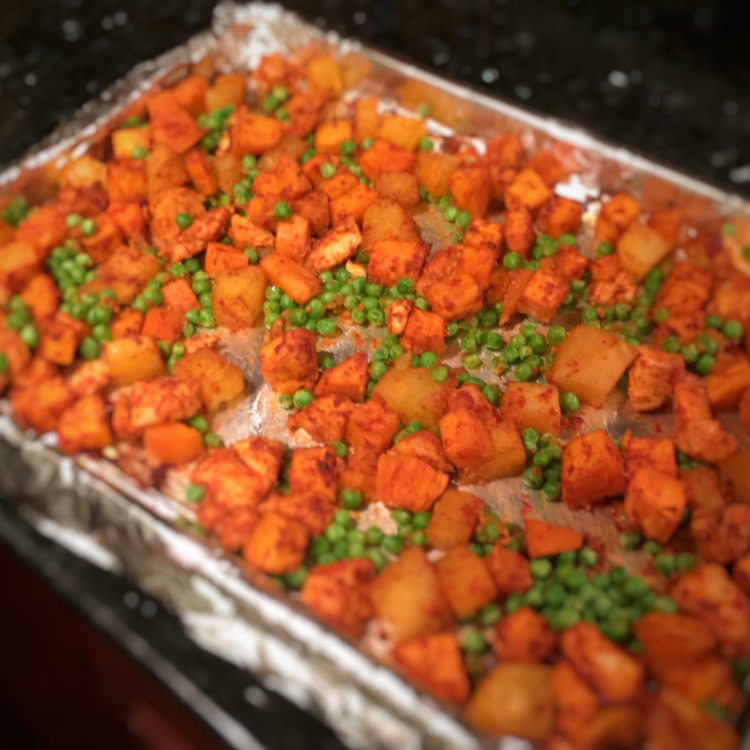 have you met Mark?

Hi! My name is Mark Seconsky and I’m a self-taught home cook. Like many Midwesterns, I grew up eating a lot of simple, economical, meat and potato type meals that could be infinitely stretched depending on how many mouths there were to feed. But as I’ve grown, learned and dared to experiment, I began to update those recipes with healthier ingredients, global influences and time-saving hacks, all while staying true to my budget-minded beginnings.

So join me and let's start playing with our food again. I hope to make each experience easy on your wallet, easy on your waist and hopefully as enjoyable to cook as it will be to nosh!